If you are looking for an online Pokie game to play that is going to give you loads of winning opportunities, then we think you are not going to find a much better pokie game to play at a Real Time Gaming powered site than their new Coat of Arms Pokie machine which comes with two bonus games which can be triggered, and on top of that on any spin you can win one of two random jackpots. 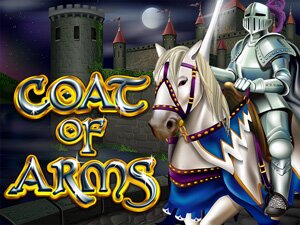 The Dark Knight symbol is the one you want to be looking out for on this pokie, for this symbol is the Wild and appears on reels 2, 3 and 4. This symbol will stand in for all other symbols except the White Knight symbol, and for any win it completes, it will also double the value of the initial prize.

There are 2 scatters on this pokie. The Golden Shields, which are covered below in more detail, and the White Knight symbols. Both have features attached to them. The White Knight, should you spin 2 or more of them into view will award a single re-spin, and this will lock the reels with the Knight on them in place, while the others re-spin, offering you another chance at spinning in a higher paying win.

When the Golden Shields spin in on the first 3 reels, you’ll be awarded a set of free spins. During these games, you’ll find something very unusual, and that is the first 5 free games see wins doubled, the next five are tripled, and from there on out, any prizes are quadrupled, making these games potentially highly profitable!

You can also be awarded a Respin feature when just two of the standard White Knight reel symbols have spun into view and you could win up to 10 Respins which sees the scatter symbols being held for each one awarded to you.