Character symbols from the Film and a set of Dinosaur symbols. 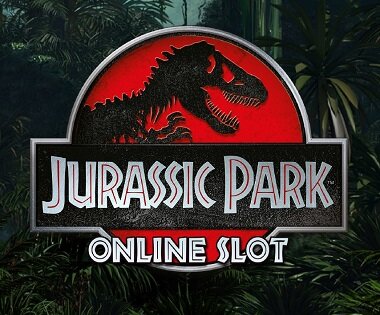 One Pokie machine that has taken Microgaming quite a while to design and then launch is their Jurassic Park slot game, as the name of this game does imply it is a Pokie machine that has been designed amount the film of the same name, which whilst release many years ago has finally been brought back to live and can now be played for free or for real money at any of the many Microgaming powered online casino sites.

The logo symbol is the Wild symbol, and you will notice that it is stacked on all five video reels of this Pokie machine in the base game, which does of course mean that as you are playing 243 ways to win it is possible to spin in a spin on which the screen is covered in wild symbols, and when that happen you will win 243 jackpot payouts each one worth 8000 coins each when playing maximum bet spins!

When you are playing the base game a randomly awarded bonus game can be triggered and this will see lots of additional wild symbols being added to the reels for several consecutive spins, which will possibly enable you to spin lots of them in and form loads of winning combinations when they do.

This slot also offers players with a set of free spins, there are four different ones which can be awarded to players, however in the early stages of you playing this slot one of the four set of free spins will randomly be awarded to you when you trigger the bonus feature round, and then as soon as you have triggered them a certain number of times the Pokie game will let you pick which set of free spins to play off yourself!

The four different sets of free spins all come with an additional bonus type feature attached and in play as they are playing off, for or information on what they are simply click on the pay table and you will find the information fully listed there!