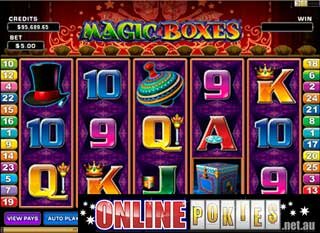 Its top payout is 1,000 credits and the scatters can award payouts of up to 10,000 credits. Players can enjoy the game via download or flash player client.

Magic Boxes is a pokie game suitable for all players. It accepts coin denominations of $0.01-0.20 and players can place bets of $100 max per spin or max of 20 coins per line. It allows a minimum bet of $0.01 making the game highly attractive to penny pokie players. The acceptable currencies include USD, CAD, GBP and EUR. 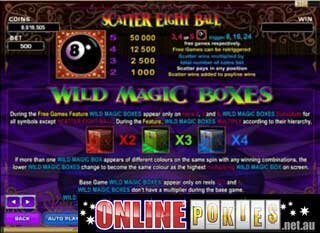 Magic Boxes pokie makes use of three wilds which are depicted by the Red Magic Box, Green Magic Box, and Blue Magic Box symbols. The wilds substitute other symbols to award payouts and they only appear on reels 2, 3 and 4. The wilds do not substitute the scatters as well as activating the free spin bonus feature game. 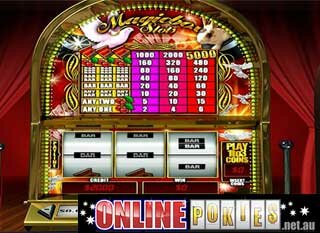 The free spin bonus feature occurs when three or more Eight Ball symbols show anywhere on screen. You will receive up to 25 free spins and a 4x multiplier when a wild symbol appears anywhere alongside a winning combination. Each wild symbol Red Magic Box, Green Magic Box, and Blue Magic Box will award a multiplier value of 2x, 3x, and 4x respectively. More free spins can be awarded during the bonus game.