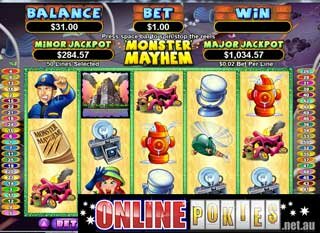 This Realtime Gaming 5-reel, 50 pay line pokies game with amazing features, characters, animation, and sound. The Monster Mayhem pokies game is filled with drama, action and horror and interesting characters such as scared woman, terrified policeman and images such as a monster footprint and more. Just as the name states, this game is all about monsters and total mayhem. It has a horror theme and great features such as Monster Mayhem Re-spin bonus feature, wild symbols, scatter symbol and even more.

The coin denomination in the Monster Mayhem slot is between $0.01 and $5.00, which is quite affordable and sure to attract any player. The maximum amount that players can bet per spin is $250 with the currencies offered including ZAR, USD, and GBP. 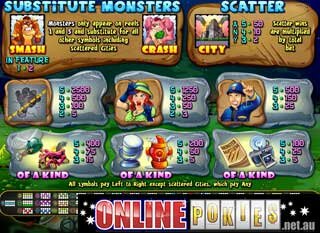 The scatter – Burning City symbol can appear anywhere on screen to trigger an entry. When three or more Burning City scatter symbols appear, the player is awarded multiplier values of 2x, 10x, and 50x. 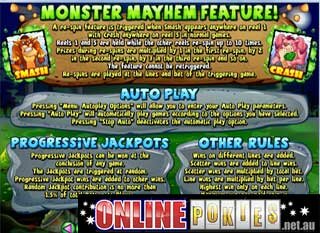