Shoot pokies is based on a football theme and showcases talented football players with the likes of Pele, Maradona, keegan, and many more. It is a 5 reel, 50 payline video pokies from Microgaming that offers a top jackpot of 37,500 credits.  During the bonus feature, players have an opportunity of winning more than 600,000 coins.  Instead of awarding multipliers, the scatters can award up to 50,000 coins. During the bonus feature game, you will come across symbols such as the Red Card, Football and many others. 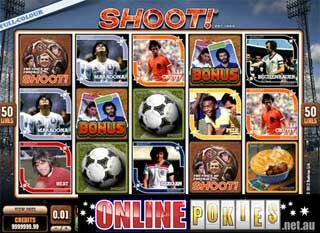 The pokies game is suitable for all types of players and the game can be played free or real money. Its betting limits range from $0.01 to $0.10 and allows a max bet of $100 per spin making it attractive to both penny pokies players and high rollers.  Each payline allows a max of 20 coins and the minimum bet to activate all paylines is $0.50.

The wild symbol is depicted by the Shoot Football symbol that substitutes all other symbols to complete a winning combination. The wild does not substitute the scatters as well as activating a bonus feature game. 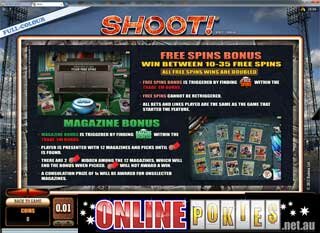 The Shoot Bonus Feature rules is triggered when three or more scatters appear anywhere on the reels. In this bonus game, players will receive random bonus prizes as well as activating the other two bonus games – Magazine Bonus Game Rules and the Free Spin Bonus Rules.  Players can win up to 619,000 coins.

When you have activated the Magazine bonus Game Rules during the Shoot Bonus Feature rules, you would have to select any magazine out of 12 shown on screen to reveal a random bonus prize. A magazine that reveals a Red card symbol ends the bonus feature game.

Activating the free spin bonus round awards 10 to 35 free spins and additional free spins can be retriggered during the proceeds of the game.