You should get plenty of slot spinning action for your money, if you give this Egyptian themed pokie machine some play time. You will find this recently released slot is available to play in all of Microgamings fully downloadable casinos.

If you opt to play this pokie game you will be able to play it with coin values as low as AU$0.01 which makes it a great penny slot to play. The slot itself has 25 paylines, so a minimum coin spin playing all 25 lines will of course cost you AU$0.25.

The Throne of Egypt pokie games Wild symbol is the logo symbol, and it can and will stand in for all other reel symbols in play on the pokie machine. It will not however stand in for any of the Scatter symbols nor the Bonus symbols.

The best aspect about this Wild symbol is that is has been designed as a Stacked Wild symbol, and as such it is possible to see if spinning in and landing on the reels whereby all of the positions on that reel become wild. 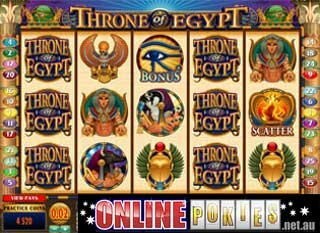 So if you get lots of the reels becoming completely wild ones then some massive amounts of cash can be won, whilst this may be a rare event having a screen full of them, anything is possible on Microgamings completely random pokie games, which adds to the excitement of playing them!

The Scatter symbols which is found in play on this pokie machine are the Flaming Asp symbols. Whenever you get two of more of them spinning in one reels numbered one and five in the both base game spin then a free spins round is triggered.

There is a Bonus symbols in play on this pokie game and that is the Eye or Horus symbol, and when you get three of them appearing on reels 2, 3 and 4 all at the same time then the additional bonus game is triggered. 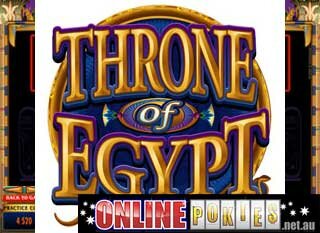 You will be given a set of free spins on this pokie machine whenever you spin in two of the Scatter symbols on reels one and five both at the same time, and when you do you are going to be initially awarded a set of 15 free spins which will all play out on a x2 multiplier.

The Throne of Egypt pokie games free spins can be re-triggered when you are playing out your initial set of free spins and this is done by spinning in another 2 scatter symbols on reels one and five at the same time.

If you get three of the bonus symbols on reels 2, 3 and 5 all in the same base spin then a special and potentially high paying picking game is awarded, this will simply see you selecting items off the screen in an attempt to find the high paying symbols hiding underneath your chosen ones. 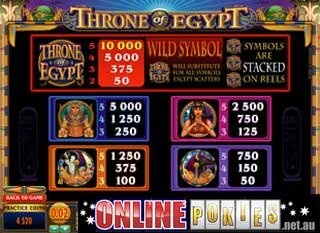