Microgaming has brought out a brand new 25 line pokie machine recently which is of course this Tigers v’s Bears game, which is going to appeal to all you pokie players who like pokies offering a video screen format and a very regularly awarded bonus game.

Being a Microgaming pokie you will get all of the usual player adjustable controls, an excellent game play and the very real chance of having a large paying winning combination dropping in, and this is due to this pokie machines high payout percentage and generous paytable. 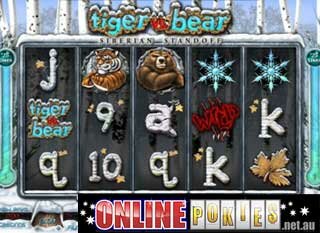 This Tiger v’s Bear pokie game has variable stake levels at which you can play it. You could opt to play the pokie for relatively low stakes, to do this simply set one payline into play with one coin activated on it and with the coin values at just 0.01, which will result in you playing for one cent per spin.

However if you put all 25 paylines into play, with the maximum number of coins per line activated, that being twenty, and with the coin values set a 1.00, then each spin will cost you AU$125.00 per spin. 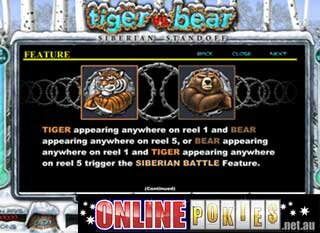 This pokie machine has a Wild symbol in play, and this is the Wild Claw symbol. This will stand in for all of the other reel symbols however it will not stand in for the Scatter symbol.

This is a basic Wild symbol, and as such it will only stand in for other reel symbols and help complete winning combinations. It does not have a set of payouts attached to it. 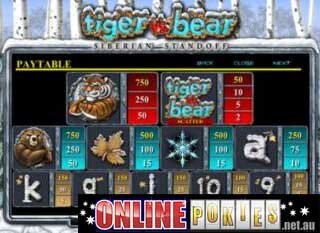 Get a Bear on reel one and a Tiger on reel five (or visa versa), both at the same time in one single base game spin and you will trigger the bonus game. This will then see you having to select either the Bear or the Tiger on the screen by clicking on one of them to determine which bonus game you are going to play.

If your selected animal does not win the battle then 4 free spins are awarded. The Bear Claw bonus round will see you playing a simple picking game where you need to keep on picking Claws off the screen in the hope you uncover coin values, reveal a Stopper symbol and this bonus game ends.