There are not that many online pokie games with boast a French theme, however this Voila pokie is one of them, found in all Microgaming downloadable casinos this one has a special playing structure.

You will be able to play and activate 243 ways to win on every game you play, but there is no need to play 243 coins to cover them all, just one set of 30 coins, which can be increased, will see you covering them all, so expect to see lots of winning combinations forming each and every time you play it. 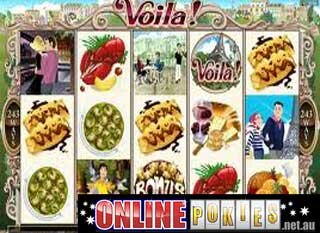 The Voila pokie games Wild symbol is the Voila logo symbol, it can and will stand in for all other reel symbols in play on the pokie machine. It will not however stand in for any of the Scatter symbols.

A set of payouts are awarded when you get at least three of these symbols anywhere in view from reel one and then one any adjourning reels. When playing one coin per spin you are awarded 150 for three wilds, 400 for four wilds and get a wild on each reel then you will win 1500 coins.

The Scatter symbol which is found in play on the Voila pokie machine are the Bonus symbols. Whenever you get just two of them appearing anywhere on the screen then you are awarded a payout, and also the bonus game is triggered when you get three or more of them..

There is a free spins bonus game on this Voila slot game and to trigger it you need to get three or more of the scatter symbols appearing anywhere on the screen during any one game, when you do you are awarded the scatter payouts listed above, and then the free spins round is triggered.

The Voila slots free spins round awards you with a total of 20 free spins, and as each free spins in played out, should a winning combination be formed then the wins value is multiplied by two times its usual value as is listed on the Voila slots pay table. 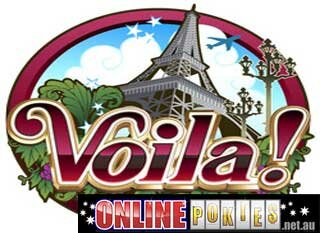