There are plenty of pokie machines that you are going to be able to play if you love the sport of Football, and one that has been launched online by a GameSos, is their World Cup Soccer pokie just in time for the 2014 World Cup Tournament! 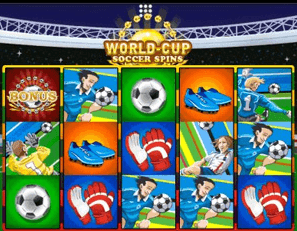 The Wild Football symbol is the Wild symbol on this World Cup Soccer pokie machine. When it spins in on any reel position it can and will help form any winning combination. This reel symbol can also extend and cover all of the reel positions when it spins in on the middle reel, so by playing maximum coins when this Expanding Wild symbol is activated then lots of winning combinations could be formed!

The Whistle symbol is the Scatter on this pokie machine, and you will be hoping that at the very least you manage to get three of them spinning into view when playing this game. For by doing so you will be awarded with the main bonus game feature described below. As you play off any set of free spins if you spin in another three or more of them on any one single free spin then another set of free spins are added to your total, at the same rate at which they are awarded when you are playing the base game, so you could win a large number of them if those Scatter symbols keep on spinning in!

There is also a second bonus game which you will be hoping to trigger when playing this World Cup Soccer pokie game online. This feature is triggered when three of the Bonus Football symbols line up on any activated payline.

This second bonus game feature is a pick to win bonus game which is themed and based on a Penalty Shootout type feature. You are tasked with having to pick one of the areas of the Football Net in the hope that once the penalty shot has been taken the Football then lands in the back of the net in the location you picked, and if so then you are awarded with a winning cash payout.

The value of this second bonus games winning payout is based on the amount of cash wagered on the spin the bonus game feature round was triggered.