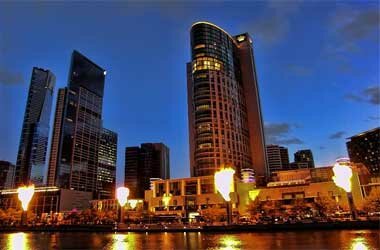 The Crown casino in Melbourne, Australia is one of the top casinos in the country but has received a lot of criticism during the past few months.

The Crown casino has been accused of being a recruiting ground for the crime syndicate who use the casino premises to lure and threaten unsuspecting gamblers in to drug trafficking and prostitution.

Now the Crown casino has been accused by Tim Costello, an anti-gambling campaigner of using stealth tactics to attract minors into the casino and lure them into gambling. The Crown casino recently opened up a special ‘Family Entrance’ on the promenade of the Yarra River and uses bright green arrows to draw entrance to the sign. The entrance leads straight to the food court of the casino complex and the Crown wants to promote the same as a place where families can visit and get together for a meal. Tim Costello, chairman for the Australian Churches Gambling Taskforce stated that the company was using stealth marketing to lure minors into the casino.

In a statement, Costello said

I think this is quite insidious and dangerous. This is anything but family friendly. What the casino’s trying to do is camouflage the fact that it is basically a casino. Children should never be exposed to gambling. You talk to most parents [and] they’ll say: ‘I cannot protect my children now from the assault of gambling. This inundation and wave is just gingering up the next generation for many who will be problem gamblers, [the] family-friendly [concept] is therefore just another brick in that wall and it’s very dangerous

Costello’s views were also shared by the Victorian Interchurch Gambling Taskforce chairman Mark Zirnsak who stated that the casino was very clearly a gambling facility that was meant for adults. Zirnsak felt that the advertising campaign promoting it as a family entrance was misleading and should not be allowed.

The Crown casino condemned these allegations and stated that they were trying to do the exact opposition of what they were being accused of doing. The casino stated that by using the ‘Family Entrance’ sign they were encouraging individuals under 18 years of age to use this entrance to enter and directly go to the food court and not directly be exposed to the gaming floor.

A representative of the Victorian Government stated that the government backed the concerns of the community and did not want any grey areas exposing children to the practice of gambling.